FROM SECRET WEAPON TO OFFICIAL SPORT 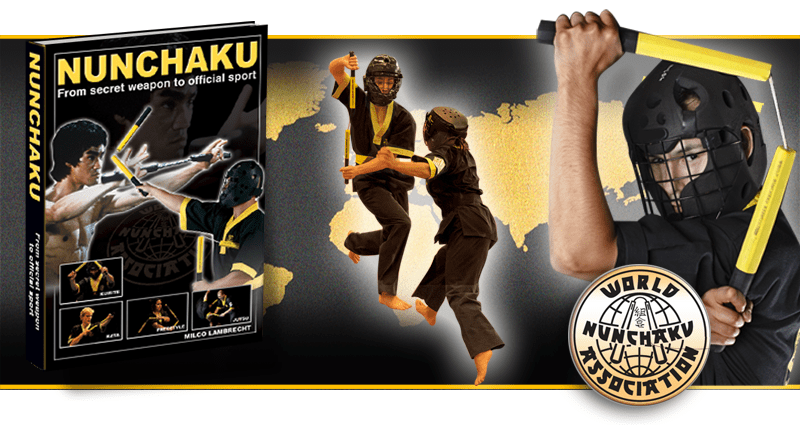 The complete nunchaku book about the development of a forbidden weapon into a official sport!

The fighting films of Bruce Lee in the early 1970s caused a new craze. Gyms were overwhelmed with requests for martial arts. In addition to established sports such as Judo, Karate and Taekwondo, Kung-fu became a well-known concept.

But there was another new phenomenon; the nunchaku. The lightning-fast fighting sticks had a major effect on a wide audience and the traditional hand weapon quickly became a status symbol for young people. Because of the side effects of this popularity, the Dutch government intervened in 1974 and the nunchaku became a forbidden weapon. For more than ten years it was relatively quiet around the “Bruce Lee Fighting Sticks.” Until the foundation was laid for a new sport in 1984. Milco Lambrecht developed a special plastic nunchaku and around it created an independent sport, complete with graduation requirements, competition rules and teaching methods: “nunchaku-do”. Due to the Legal aspects, the development of this new martial art did not go without a hitch. But due to the determination of a group of fanatical martial arts enthusiasts, the nunchaku-do grew into a national and later even international sport with a nationally recognized status by joining the NOC * NSF. This book gives a clear picture of a sport that is based on Eastern reading, but is a Dutch invention. From a forbidden weapon to a recognized sport!

This complete Nunchaku book is available in our webstore